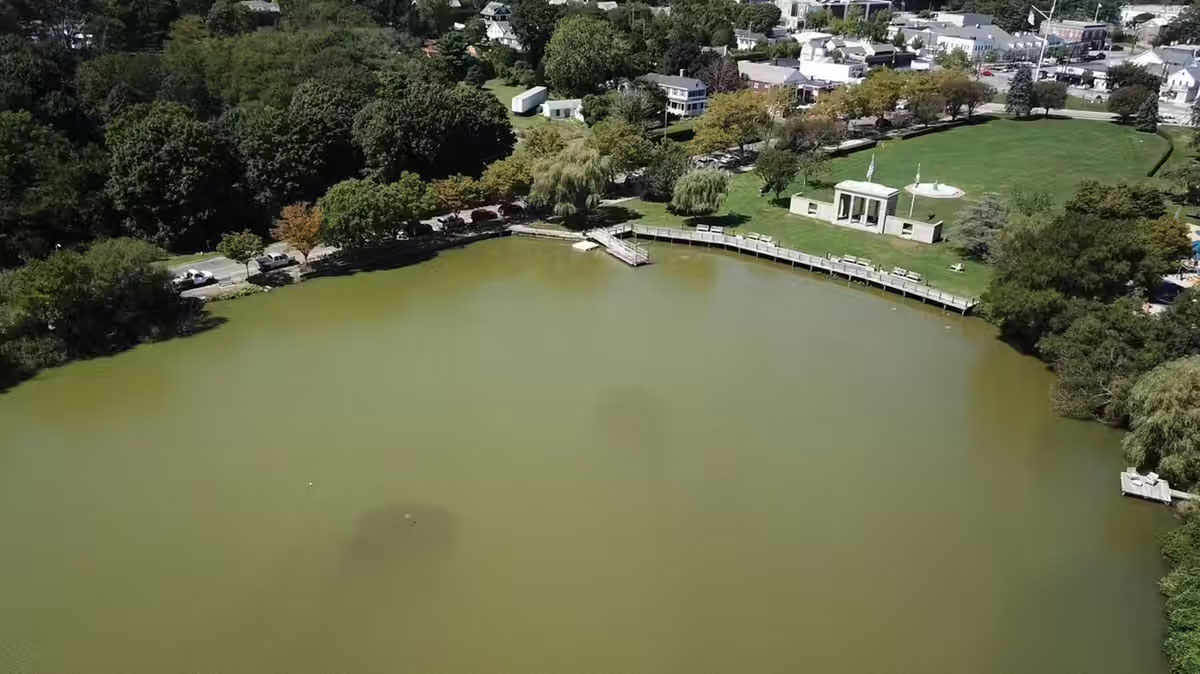 For years, harmful algae blooms have tainted various Long Island waters, but local residents got a harsh wakeup on a long-term problem when three dogs in North Carolina died hours after frolicking in a pond with toxic blue-green algae. Suffolk County consistently tops the state’s counties in the number of ponds, lakes and other fresh waters colonized by cyanobacteria, a blue-green or green algae with a paint-like, scummy appearance floating on the surface, said biologist Chris Gobler, a Stony Brook University professor who has been testing waters for this algae since 2003.
Credit: Newsday / Chris Ware

Harmful algae blooms have tainted various Long Island fresh waters for years, but local residents got a harsh wake-up on an annual hot-weather problem when three dogs in North Carolina died after frolicking in a pond with the toxic bacteria.

Suffolk County consistently tops the state’s counties in the number of ponds, lakes and other freshwaters colonized by cyanobacteria, a blue-green or green algae with a paint-like, scummy appearance floating on the surface, said biologist Chris Gobler, a Stony Brook University professor who has been testing waters for this algae since 2003.

This summer in Suffolk, cyanobacteria has been suspected or confirmed in 19 bodies of water, including 12 in just the past two weeks, according to state data. None has been reported in Nassau this year.

The bacteria proliferates in high heat and this July was the hottest month on Earth, according to weather records kept since 1880.

“I think the whole country is becoming more aware of these algae blooms,” Gobler said, “Part of it is this is a climate change story. Around the country, the window of opportunity for these to occur keeps getting wider and wider.”

From breaking news to special features and documentaries, the NewsdayTV team is covering the issues that matter to you.

For humans, the toxins are usually not lethal but cause skin irritation or gastrointestinal problems, such as diarrhea and vomiting, authorities said. Other toxins from the blue-agreen algae can paralyze the nervous system, including shutting down the ability to breathe, they said.

But for dogs and likely other animals, the cyanobacteria is often fatal, experts said. The toxins can cause dogs to vomit, have diarrhea and have their livers shut down.

Just in the second week of this month,10 dogs across the nation died from cyanobacteria toxins, Gobler said. That included the doggy playdate that turned tragic for three dogs and their owners in North Carolina — a story that went viral and thrust the problem into the public spotlight.

In 2012, Rosie, a 4-year-old Jack Russell terrier, died after possibly licking foamy water from her feet on the beach of Georgica Pond in Wainscott Village, said her owner, Annie Hall, who lives right by the pond: “She went into neurotoxic shock. We found her splayed on the beach like a pancake.”

A test revealed the toxin in Rosie’s tissue, Hall said. “Was it a shock? Yes. We just didn’t know anything about it.”

She co-founded the Friends of Georgica Pond Foundation, which raised $2 million in four years to clean the pond and led East Hampton Town to require the installation of environmentally beneficial septic tanks on new and renovated properties. “Her death did some good,” Hall said of Rosie.

Nitrogen from septic tanks and fertilizer runoff from lawns and farms feed the blooms, experts say.

State health and environmental officials have seen the number and locations of blooms rise since they started monitoring the problem at least seven years ago — almost 400 freshwater bodies so far. The state in June launched a new reporting system for harmful algae blooms, or HABs, including a map of affected waters, and publicized its slogan of “Know it, Avoid it, Report It.”

But getting a grip on the problem and its solutions is a challenge, officials said.

Cyanobacteria have existed for thousands of years, he said, but scientists still don’t know all the factors feeding algae blooms and why they produce toxins at certain times but not others. They want to find any genes that turn on the toxin manufacturing.

On top of that, the blooms can be “ephemeral,” Sokol said. It may look like they disappeared, but the wind has actually blown them to the opposite side of the lake, he said. Other times, the floating algae breaks up and is hard to detect, he said.

Most algae blooms are not harmful, state officials said. “But you can’t tell by looking at it,” said Rebecca Gorney, a research scientist and expert on cyanobacteria blooms.

She and other experts advise people not to even touch waters that are discolored green and to wash their hands and their pets as soon as possible after any exposure.

When scientists or the public suspect the presence of a harmful algae bloom, the state and counties close the waters to the public without waiting for tests to confirm cyanobacteria. Only about two dozen among thousands of cyanobacteria species produce toxins, but the poison is fast-acting, experts said. Before the beach or waters are reopened, they test for levels of cyanobacteria.

State officials advise dog owners not to let their pets go into freshwater ponds and lakes in hot weather, just to be safe.

For 21 years, the Long Island Dog Owners Group has organized walks in parks, but since the North Carolina story went viral, dog owners have been asking if it’s safe to take the next scheduled walk, at Southards Pond Park in Babylon on Sept. 28, said Huntington resident Ginny Munger Kahn, the nonprofit’s president.

Southards is on the state’s HABs map, but Munger Kahn said none of the 30 or so dog owners who signed up has canceled.

“We’re making it very clear to people that they should keep their dogs away from the water — all water bodies,” she said. “We don’t want to take any chances.”

* Don’t swim, fish, boat, or wade in areas with blooms.

* Rinse with clean water if you, your family or pets have contact with blooms.

* Don’t drink the water. Boiling won’t remove the algae and the toxins